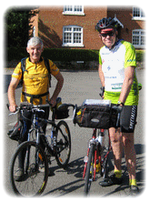 How many do it each year?

. .  that's just cycling that we're referring to here (whether that's one, two or three wheels - upright or lying down) for the End-to-End.

In reality, nobody knows as many riders just do it and don't fill in the record books at LE or JOG - sometimes because they don't want to, or don't know there are books ... or the book-holding locations are closed.   The Land's End Company has the End-to-End Club but despite enthusiasm from the lady who runs it, the information is scant.

Found this amusing quote somewhere  :
"I personally like to drill holes in my socks to save weight. I estimate you can drill out approximately 50% of the sock without compromising structural integrity. And the actual performance benefit is much greater than the dry weight reduction due to the reduction in rotational inertia through your pedal stroke"
. . . but then drilling holes in chainwheels, brake levers etc used to be the vogue ... and of course minimising the length of the bit of cable that protrudes from the brake caliper!

. . I stumbled across this quote and thought it was appropriate to the pleasures derived from riding the end-to-end : 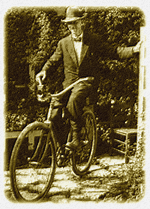 It is by riding a bicycle that you learn the contours of a country best, since you have to sweat up the hills and coast down them.  Thus you remember them as they actually are, while in a motor car only a high hill impresses you, and you have no such accurate remembrance of country you have driven through as you gain by riding a bicycle.

An extract (with permission) of the CTC Cycle magazine article that appeared in the December 2010/January 2011 edition is now in the Journal library (under Other routes - UK, No 569)

Four different takes on the classic journey - including a ride in 2010 on a Raleigh Chopper!