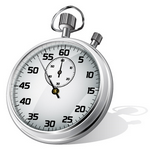 The record for cycling from Land's End to John O' Groats is held by Andy Wilkinson, who completed the journey in 41 hours, 4 minutes and 22 seconds on a Windcheetah recumbent tricycle.

The official Road Records Association record for rider on a conventional bicycle is 44 hours, 4 minutes and 20 seconds, set by Gethin Butler in 2001.

The following is an extract from the (now defunct) endtoenders.co.uk  website :

Travelling from Land's End to John O'Groats (or the other way) - an 'end to end' - is not a totally modern idea, we have records dating back to the 1800's. Over the years, the trip has been done by many tens of thousands of people and in a number of amazing ways, however, it is a unique challenge and quite an incredible achievement.

Many will remember hearing of Dr Barbara Moore and the Billy Butlin walks of the 1960's, Ian Botham did it twice and in March 2005, BBC Radio 1 DJ Chris Moyles in support of Comic Relief and James May from BBC's Top Gear in support of the RNLI.

By doing this journey you will join the ranks of the famous and be able to claim your 15 minutes of fame!

The most popular forms of transport are walking, driving or cycling but it has also been done by a Harrier Jump Jet, turbo charged JCB digger, wheelchairs, 'celebrity cars' and a motorised bath tub. Someone even posted himself and literally became 1st class mail!

Unicycle
The unicycle record for the Land's End to John O'Groats journey as far as records show is held by Michael Arets and Mike Day who traveled 880 miles, in 14 days 12 hours and 41 minutes between 27 August and 10 September 1986.

UPDATE:  Sam Wakeling and Roger Davies and stands at 6 Days 8 hrs and 43 mins

Youngest Cyclist
The youngest known end to end cyclist is Bow Jango Cann, aged seven and nine months, who on 21 July 2002 took the record from his brother Capability Jack Cann, aged eight, who had earned the title only ten seconds before. They did the trip in 22 days unaided using their own bikes, they rode with their teenage sisters and their parents Jim and Sam.

UPDATE: From Jane Moore (the record holder)
The women's solo tricycle standard for Land's End to John O'Groats was beaten in 2014 by over 19 hours thereby setting the first RRA record for this category.  Rider was Jane Moore of Willesden Cycling Club. Time 3d 16h 45min and 21 sec. (4-7 August 2014)