It all started back in June 1975 when my (ex, and now late) father-in-law hired a Rice trailer to move a horse from Kent to their new house in Devon . . . well, the small Citroen he had didn't cut the mustard as a towing vehicle - a panic call for help was received . . . I had a TR6 sports car so even less use!

Some very quick thinking on a Friday evening - local paper - Land Rover* for sale - £425 - tax, MOT etc - buy it - stick a note through insurance broker's office door -  take trailer to Devon and back to Kent over the weekend - put the Land Rover back in the paper the following week.  Well, that was the theory.

The part up to getting back home (to South-west Essex) worked fine . . . but the Land Rover was such fun to drive I decided to keep it as the "second car" ... at the end of that summer we took the Motorail from London to Inverness and toured around northern Scotland (my first visit to John O'Groats ... I would have laughed if someone said I'd be back there on a bike, twice) and the Hebrides.

Pregnancy in 1976 (not me!) meant a change to a more practical second car so the Land Rover went to be replaced by a Mini Clubman Estate ... and I bought a Volvo (the original 2-series tank with the lights on all the time)

By 1980 we had moved a bit further into the country to a house with about an acre of ground . . acquired a pony and needed transport for the beast!

So, a Land Rover was the obvious choice and an SWB hardtop was sourced for me to refurbish, fit seats and side windows etc. - a diesel if I recall.  Sadly the vehicle was involved in an accident - a Mercedes skidded on ice and hit our stationary Land Rover, bending the chassis such that it was an insurance write-off.  Next up was a LWB ex-military petrol (very heavily undersealed) which we fitted with a hardtop, windows, seats etc. 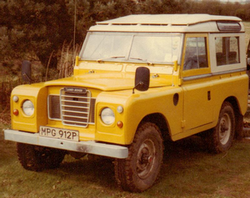 That was the second car until we acquired a Series III Station Wagon - that's the one built with 7 seats and the thin windows in the side of the roof (they're called Alpine Lights, apparently) - it was bright yellow and everyone thought it was ex-AA ... it wasn't, it had been at Gatwick Airport leading planes into the terminal gates.

The addition of a few bits and pieces plus an overdrive unit made it an excellent vehicle to tow horse trailers ... and the subject of my new found passion ...

An invitation by a work colleague to go to "watch some Land Rovers" one weekend in 1982 introduced me to off-road motorsport .... there are two main themes :

"Trials" - driving between 10 gates (two bamboo canes) set in rough terrain with ditches, streams etc. - points being awarded for not touching the canes.

"Safaris" - driving at high-speed around a course of anything up to a couple of miles, against the clock. 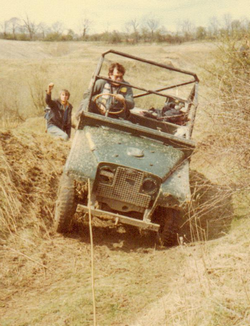 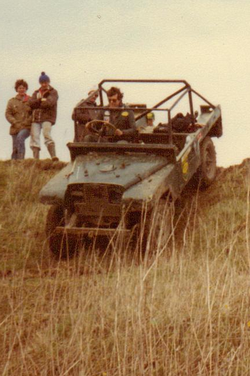 My interest was in the former (that's me in the pictures) and after having a go in a friend's vehicle I acquired, for £200, a complete outfit comprising: old Land Rover with a 3litre engine and fitted with a roll-cage etc - plus a trailer to transport it to events (behind the "second car" yellow Land Rover)

Great fun - which was to get even better when we moved again and bought a farm-house with about 4 acres of ground, comprising a worked-out gravel pit that had grassed over and sprouted a small wood, or perhaps a copse ?, together with some fenced paddocks for the horses - the pit was the playground for me!

I joined the Land Rover Club and the All Wheel Drive Club .. to compete in trials events, with modest success (a few cheapo trophies are around somewhere).  We were also able to host a couple of small events at our own farm in about 1983-4.

A job-move to Cheltenham and another farm-house with about 4 acres and a big barn gave me more scope for tinkering with Land Rovers (did I mention I acquired another 3 old ones - one of which I stripped and rebuilt, before selling it on)

A lack of events within a reasonable travelling distance and a change in circumstances meant that my Land Rover interests dwindled away ... selling most of the fleet, keeping just one fun vehicle . . . which I finally sold in about 1993.

Along the way, to be able to cut grass and spread the odd bag of nitrogen to rejuvenate the grass in the paddocks I bought a Ferguson TE-20 tractor - the Little Grey Fergie - it was a TVO model (that is, it ran on Tractor Vaporising Oil ... which was paraffin with a dash of petrol added for some oomph)

The machine had the same engine as a 1940/1950s Standard Vanguard - the real difference was that it had two fuel tanks - a small one for petrol and a large one for TVO - you started the engine with petrol and when it was warm, switched over to the TVO tank for normal running (you also had to remember to switch back before you stopped the engine so that the carburettor had petrol in for the next cold-start)

With its gear lever between your legs and a hand lever accelerator it was interesting to drive - I managed to get it re-registered and was thus able to drive it on the road (I think the distance I could go from home was limited, but I could drive the 3 or 4 miles to the garage to fill it up)

The Fergie was useful on our mini-farm with its 6-foot wide mower, transport box, spreader etc ... as well as giving two of my children some initial driving experience (at the ages of 7 and 9)

The grand plan to restore the tractor stalled through lack of time ... and the onset of cycling so it was sold to an enthusiast who did do the restoration and now takes it to agricultural shows as an exhibit. 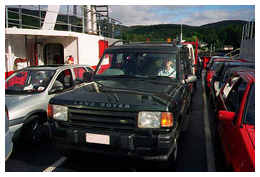 After a break of about 5 years I bought a Discovery to use as my car - first one was a 2-door diesel that was a "Rover Management Car Plan" vehicle about 10 months old.  After about a year, in May 1997, I bought a brand-new 200 series 4-door diesel Discovery in dark green.

I kept this vehicle until 2005 - the longest period I had ever kept the same car - before selling it to buy a more economical and practical estate car (with a towbar mounted rack to carry bikes!)

The photograph, in 1998, is taken on the Corran Ferry, just to the south of Fort William.

I now drive a Dacia Duster which, although only 2-wheel drive, is a bit like an "economy Discovery"