Having mastered a two-wheeler at the age of 4 my first real riding started way back in the late 1950s and 60s when I cycled both to get to and from school and for pleasure, including a couple of "Essex County Marathon" touring rides when I was a Boy Scout (Groups of 4 riding about 40 miles in total over two days with camping gear). My Cycling Proficiency badge was acquired in 1958. 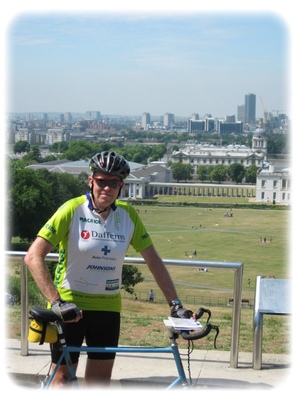 Along the way I managed a couple of injuries - in 1959 on my way to school I ran into the back of a car, went over the handlebars, hit the car roof and cracked my nose. Then in 1962 a motorcycle (being ridden at way over the speed limit) collided with me - that made a gash on my ankle/lower leg that was so deep that you could see the bone! - fortunately there was no damage to the bone and the gash was just stitched (I hold the family record for the most stitches!) Annoyingly both incidents were at the very end of the school summer term so I didn't manage much time off school.

The rides in the sub-sections here are all from the late 1990s onwards when I became a "cycling returner" - some rides were tough, others were easier . . . but all have been great fun.

UPDATE - June 2021 : Having been thwarted again by the ongoing overseas travel restrictions most of the group that expected to be touring in France in 2020 will be on a five day tour around Oxfordshire in September 2021. The start is local to home so no transport issues, just more expensive accommodation and an emphasis - probably - on beer rather than wine.