Some pictures still to add.


. . but not forgotten - excluding another 3 or 4 frames that have come and gone.

Orbea Gain eBike - tourer - sold in March 2021 as it was getting very little use as a result of my fitness improving and changes in cycling activity. 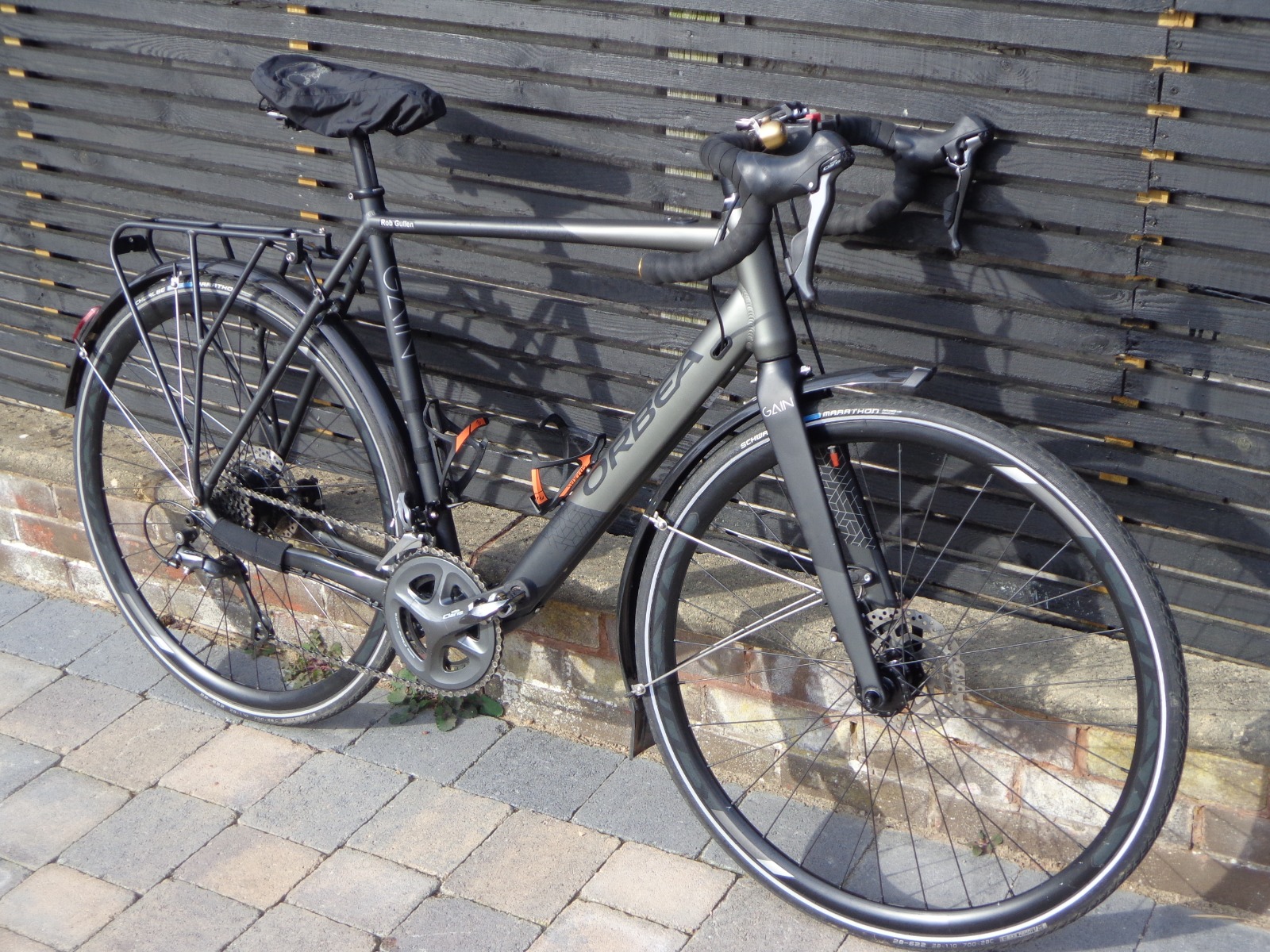 Purchased new in 2018.  With advancing years and some issues with post-cancer fitness I had been looking at an electric solution - possibly converting my faithful red Dawes Galaxy.  The more I looked at it any sort of conversion was always going to be a compromise - so when I saw that Orbea had introduced an eBike that didn't look like an eBike I took a look.  The Orbea Gain had fantastic write-ups in the cycling press in terms of quality, performance and value for money.

The plan is to ride as much as possible in non-electric mode and just use the juice to help me up the hills.

Sadly something will probably have to go as the n+1 factor is getting out of hand . . . again - it may have to be the much-loved Galaxy (it was, sold in June 2020)

As the photograph suggests it does look like a standard road-bike ... it's aluminium and weighs virtually the same as my steel Galaxy.  The motor is in the rear wheel (just looks like a larger hub) and the control is a very neat, small illuminated button on the top-tube, just behind the stem. The battery is housed in the down-tube and charged in-situ with a socket above the bottom bracket.  I've upgraded the tyres to Schwalbe Marathons, fitted a Brooks B17 saddle as well as mudguards and rack.

Dawes Galaxy - Tourer - sold to another Galaxy enthusiast in June 2020   [After considerable heart-searching as the machine had become a good friend, if it hadn't been ridden for a while coming back to it was a bit like the pleasure (to me anyway) of putting on a very comfortable old, well-worn pair of corduroy trousers!]

1975 Reynolds 531 frame, purchased from eBay as a complete machine in pretty poor condition - I had it re-sprayed and rebuilt it with new wheels and most of other the components replaced.

This machine was used for the 935 mile End-to-End ride in 2005 (see Rob & Joe’s JOGLE ) - and further Boys’ Outings in 2006, 2007 & 2008 to the South of France, as well being my club-run work-horse.  In October 2009 it was repainted in a metallic lacquer red and rebuilt ready for future tours - new components included the headset, a small front rack, a replacement computer and better brakes.  It went on to complete a second End-to-End (LEJOG) many more club-runs. December 2013: Having completed a further two lengthy tours (WW1 battlefields in 2012 and Loire Valley/Paris in 2013) it's been necessary to renew the middle and outer chainrings together with the rear cassette.  The rims were well down on the indicator lines so, whilst not completely worn out, it was prudent to replace the rims - and while I was at it the hubs.  Oh, and it graduated to a Brooks B17, black, in 2011.

c 1982 Reynolds 531 frame and forks, purchased from a small ad in the CTC magazine.  Assembled with new and recycled components - new rear wheel with fixed hub built by Paul at the bike shop.
So what's it like I hear you ask?
The single gear with an absolutely basic drive-train gives minimal friction. With a reasonably low weight bike on 23mm tyres the responsiveness is fantastic. You kick down, you shoot forward. The lack of a free-wheel gives an amazing intimacy with the road. The lack of gears is not much of a problem - it's more a state of mind.  Going up a hill you just step on it, going down you just pedal like mad.  And ... you are never in the wrong gear!

In May 2015 it was fitted with a Sturmey Archer 3-speed fixed hub/wheel, with bar-end changer - still the same fun with fixed gearing but a bit easier on the hills.  Changing gear with a fixed is a bit odd - you can't stop pedaling (obviously) - you just ease off on the pedal pressure.

A further addition to the cycle equipment.

Balance bike - no pedals - just scoot along and get the balancing part, riding with pedals is then easy.

Classic tricycle made in traditional style in Stratford-upon-Avon.  Purchased (November 2008) from eBay in perfect condition (prior to the lad's birth in February 2009!).
One nagging concern is the lack of mudguards that may restrict riding with the CTC and some winter Audax events. A further Pickle was acquired in2013 for another daughter's children.

1998 machine purchased in December 2011 - it had not been ridden since about 2003 and was in almost mint condition, complete with Carradice Nelson Longflap saddle-bag. The machine was a joy to ride and precipitated changes to my choice of regular Wednesday club run machine.
September 2013 - sold ... to part fund something rather special - February 2018 - the purchaser, having barely riddden the bike, donated it at the Cyclists fighting Cancer Charity Bike Shop where I volunteered as a mechanic - I had regretted selling the bike so bought it back from the charity.  July 2019 - too many bikes and not enough time to ride them all so reluctantly sold.

Aluminium frame, carbon forks, deep drop bars, no brakes and 165mm cranks - ready to ride the boards.  Having been bitten by the track riding bug I acquired this machine as a set of parts to assemble - I just had to add the pedals. After about a dozen track outings which were great fun I decided I was never going to be as good as Sir Chris Hoy so sold the machine in October 2011.

The Flying Gate (1982, custom-built by Trevor Jarvis) is an unconventional bike with a vertical seat tube, built with Reynolds 531 tubing and fork-blades. It was acquired in November 2009 with a hybrid 5-speed Sturmey Archer hub gear with 2 sprockets and a derailleur - making 10 gears. Renovated and rebuilt with a conventional drive-trainr coated with a purple lacquer finish and rebuilt with a mixture of new and recycled parts.  The frame was exceptionally large, ~29"

Was a partner for the CB Majestic now sold, late 1970s, Reynolds 531 mixte frame and forks (ladies, twin tube).  The machine was always slightly too big so has been replaced with a Peugeot Mixte of similar vintage with all components transferred.

Mid-1980s Dawes 531 frame Mirage, acquired from a friend - refurbished and powder coated and served as my "winter club run bike" for a couple of winters.

Probably best described as Claud Butler's answer to the the Dawes Galaxy.  c1981. Stripped and re-sprayed, fitted with new wheels and some other components.  This machine was used for the Dunwich Dynamo (200km overnight ride) in 2004 and for numerous Audax events - it also ascended (and descended) some of the cols in the Alps.
Picture: July 2005, at the summit of Col de la Forclaz, Lake Annecy.

1990s "triple triangle" steel mountain bike (Giant?) - stripped and re-sprayed matt “stealth” black, rebuilt using all the original components to use as a "ride into town/the station and leave it" hack bike.

1990s steel-frame hybrid - nothing special. Acquired from one of my brothers when he purchased Dahon folding bikes for he and his wife.

c 1976 Reynolds 531 frame and forks, powder coated in blue, re-assembled with a spare set of wheels and used on a turbo-trainer

Moulton fx8 - sold in December 2008 to an enthusiast who had it shipped to Taiwan.

Mini road/cross bike with 24" wheels and scaled-down components - for our grandson.  He decided he wasn't too keen on drop bars at that time so the machine has been sold (he went from the 20" wheel Isalbike to a 26" wheel Islabike - he now has a 700c drop-bar Islabike)

1975 all aluminium folding bicycle.  Purchased in mint condition complete with carrying bag and original handbook. Seldom ridden, a collector’s item.  Being made almost entirely of bolted together aluminium components there is a considerable degree of “flex” when ridden.  Not unlike, one may imagine, riding a bag of tent-poles! Unusually, the machine has different sized front and rear wheels.

US built 1998 Bike E recumbent acquired in May 2013.  16" front and 20" rear wheels, 21 speed (3 hub, 7 cogs) - complete with bag and pannier rack.  Some initial fettling and cleaning was required but in excellent condition. December 2013 : I just wasn't riding this enough to warrant the space so it's moved on to another enthusiast.

1970s, 24” Reynolds 531 frame and forks. Some minor cosmetic refurbishment required but I just couldn't master riding it - it really is a different experience.

The bike is designed for triathlons, not me!  mid 1980s Reynolds 501 frame and 501 chrome plated forks, rescued from the local tip for a small payment.  Powder coated white, chrome forks polished. March 2009 - the powder-coat on this machine was never very good qality, and white was a mistake . . . powder-coated in emerald green, with metallic gunmetal grey front forks and rebult as single-speed/fixed.

Unicycle - passed to another would-be unicyclist in October 2008

20” wheel, not much else to say about it!  Given to me in August 2007 - another of those “I must master riding it” machines. Unable to master riding it (or, take the risk of mastering riding!) so it had to go.

Unknown make and vintage, probably early 1950s.  Very unusual in that it has a rear top-tube (that’s “crossbar” if you are over about 25 years old) which unbolts and can be fixed in either male or female (step-through) position.  Very, very heavy - fitted with 2 rim brakes and front hub brake.

1990s steel-frame hybrid - nothing special also acquired from one of my brothers. This machine was used by the BBC Midlands Today reporter covering the opening of NCN Route 41 at Stratford-upon-Avon in April 2006.

c1975 Reynolds 531 frame, re-sprayed and rebuilt with almost all of the original components. Having acquired another Galaxy, one can have just too many bikes so it was sold.

Acquired in "as new" condition from ebay for our grandson - ready to graduate from the seat on father's bike, and before going solo on the Pashley Pickle.

1963 Moulton Speed, originally purchased by my mother and owned continuously within my family - used/abused by my brothers. It came into my possession in 2001 when I had it re-sprayed, fitted with Moulton Club upgraded rear forks and a few new parts. Sadly the machine was really a little too small for me to ride, and I sold it to Michael (a.k.a. Nuttycyclist) where it will enjoy loving care and a good home with a fellow bicycle enthusiast.  Picture: My late brother Dick in, about, 1967 (aged 14) riding the machine

late 1970s, Reynolds 531 frame and forks.  Purchased as frame and forks on eBay and rebuilt with new and recycled components. Frame sold in July 2007 to a lady in Scotland who had an identical machine and “wanted another frame as a spare” ! All other parts, except wheels, re-used on the Claud Butler Majestique (see above)

Early/mid 1970s Reynolds 531 frame and forks, purchased in February 2006 as a complete machine from eBay - frame sound but the remainder in very poor condition. Powder coated gloss black - but you can have just too many bikes so the frame was resold.

1970s vintage Postman’s bike with front carrier, complete with leather straps etc.  Purchased on eBay and refurbished (just the front rack re-sprayed)  Fitted with rod brakes and original Terry’s sprung saddle. Seldom used, very occasional trips to the chippie as the front carrier tray is ideal for carrying the fish and chips home.   Not used enough to warrant the storage space so re-sold on eBay, September 2007.

Promotional machine, in mint condition with original (slightly tatty) box. Almost impossible to ride, but (perhaps) a collector’s item.
Acquired in a moment of weakness ...

It may look like a briefcase but it's a bike transit case (hard shell with straps, locks and wheels) that will carry a full-size bike, with the wheels off, and some other kit.
Used just the once, sold in March 2011.